I’ve written and tweeted about currently dealing and struggling with depression and anxiety because it wasn’t until about a year and a half ago that I was even willing to put those terms to what I was experiencing. It took even longer for me to realize how many of the feelings I experience come back to those things and to finally start addressing my struggling mental health.

Looking back (and with the help of medication and therapy), I’m now able to see how much of the deliberating experiences I had came from my depression and anxiety. Leaving my house was so hard, I slept a lot and barely showered, and everything was irritating beyond belief. The little things that make others go curse for a moment and move on would consume my entire day in irritability and annoyance. I slowly started to become someone that I eventually no longer recognized – the face I saw in the mirror wasn’t me but a shallow ghost of the part of me I long lost.

Despite realizing that I was struggling with my mental health, there was so much pushing back on me getting help – financial woes and finishing college were big but most importantly, my depression and anxiety kept me from fixing the problems I acknowledged and the stigma that exists around getting help for mental health issues kept me from really addressing anything. I didn’t realize that the consuming irritability and stress that I felt from small issues stemmed from my depression or that my anxiety led to the obsessive thoughts that ruled my head. And all of this happened over a long period of time – it took several years for things to become really awful and during that time, pieces of me were slowly chipped away.

I also worried that going to therapy and getting on medication would radically change who I am but so far, I’ve found that the complete opposite was true. My depression and anxiety radically changed me, again to the point where I barely recognized the person staring back at me in the mirror. And I am very, very privileged that not only do I have health insurance but that my parents are emotionally (mostly) and financially supportive of me getting myself back together.

And I started to realize that self care became more than watching movies and doing crafts. It became taking a shower because it’s been a few days since I last had. It became doing laundry, cleaning, and cooking myself real food. Self care has become slowly doing all of the things I avoided while depressed or anxious, especially the ones involving interacting with people. 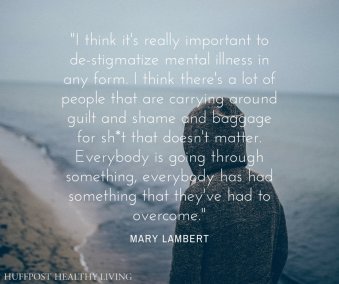 Within the US, we are particularly great at upholding stigmas and negative stereotypes about mental illness (and not just for depression and anxiety). And even those trying to seek help for the struggles they face with exceptionally real problems can run into problems from the very people they seek help from. There are trends of forcing students out of universities on medical leaves for some time, usually with the disguise of a choice. CarmenLeah Ascencio wrote on Black Girl Dangerous about going to therapy as a queer/trans person of color without having to go through experiences of being harmed, erased, or baffled by professionals.

There are so many problematic beliefs around mental illness that continue to do significantly more harm than good for those struggling with one issue or another. A big part of why I never got help before my 23rd birthday is because of the stigma that exists – I felt guilty, shameful, and like I was broken beyond belief. I never had the resources growing up to realize that all that extra angst, frustration, anger, and sadness was significantly worse than what I should have been feeling. Ray Filar wrote about the stigma of mental health over at openDemocracy in an article about why we’re all sick under neoliberalism and articulates it significantly better than I could ever do:

The silence and social stigma around mental health is deliberate, the product of an institutional refusal to talk about the affective impact of socio-political conditions. Some people get depressed, or psychotic, we think, because of chemical imbalances or individual traumatic experiences. They’re just lazy or making it up. We don’t talk about austerity, poverty, demonisation of the unemployed – the politically-driven stigmatising of the least privileged groups of people – but is it any wonder we’re unhappy?

USAToday did a series called The Cost of Not Caring, in which the topics of a failing health care system, waiting years and years before going in for treatment, discriminatory practices, and immense amounts of shame around mental illnesses are all addressed. I really recommend reading through the series if possible – there are quotes and videos of people struggling with different mental illnesses talking about different issues around the stigma and struggles of mental illness. In that series, Liz Szabo (the author of the series) also wrote that:

Nearly 40% of adults with serious mental illness received no treatment in the previous year, according to the 2012 National Survey on Drug Use and Health, produced by the Substance Abuse and Mental Health Services Administration. Among adults with any mental illness, 60% were untreated. Though some people with mental illness don’t realize they’re sick, others simply can’t find help.

And all of this is only the very tip of the iceberg as far as mental illness stigma. My limited experiences of struggling both with depression/anxiety and the stigma around them are just some of the numerous experiences that exist. There is significantly more out there about not only mental illnesses of all variations (not just depression and anxiety) but the many stigmas and discrimination that also exist. It seems easy to just pawn off mental illnesses as “fake” or things that are incredibly easy to overcome. The whole argument that they’re “just in your head” and to stop being sad (etc) downplays the often significant role that these illnesses play for the people struggling with them.