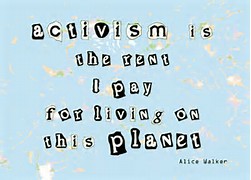 Over the past few months, I’ve been thinking a lot about activism and what it means to be an activist in the current technological age. Part of this has been that not everyone is able (for a plethora of reasons) to be on the front lines and constantly present in marches and meetings. And with the change in technology and accessibility, how has activism changed? In the age of Twitter, hashtags, Facebook, and YouTube, what does it mean to be an activist?

(*Photo from this article)

I’ve written previously about being and acting as an ally and remembering the intersectionality of life and issues, which for me are both important part of being an activist. And reflecting back on my life, I’m now able to see how prevalent my depression and anxiety has been in my life. Struggling with both along with being a very shy introvert and someone who doesn’t drink has made being a very loud and proud queer activist difficult.

With my depression and anxiety, I’m not always able to get out and go to marches; phone banks and talking on the phone to strangers is a terrifying process for me. My words and writing are often all I’m able to contribute – this blog was started mostly because I realized that writing was the best way in which I could potentially contribute to different movements. But there’s a certain amount of guilt that I feel about not being able to go out and be present on the ground.

Maisha Z Johnson wrote a post for Black Girl Dangerous specifically to other QTPoC activists, talking about participating in the movement when you’re in a funk. She writes about how all the different contributions are relevant and necessary for a movement. At one point, she also references another relevant post from Black Girl Dangerous written by Michal “MJ” Jones defending the shy in the community and movement. MJ defends the shy, introverted, and socially anxious people from a community that seems to continue perpetuating some harmful messaging from the rest of society:

Non-profit, social justice organizations and workplaces value the go-getters, the energetic and enthusiastic types that can engage audiences while suggesting “speaking up more” as an area of improvement on performance evaluations for quieter types. Each of these provide the same message: “Your silence makes me uncomfortable, and is something to be cured.” The conversation about how to make spaces safer for quieter folks or those who experience social anxiety is practically absent.

Michal “MJ” Jones also wrote a fantastic piece on Everyday Feminism about how you don’t need to be leading the marches for your activism to matter, again writing about how there are so many ways in which to contribute to a movement and how assuming everyone can participate in the same way is ableist.

And over the past few months, I’ve definitely felt a lot of guilt over not being able to be on the front lines of marches or manning phone banks for fundraisers and support. But I’m definitely regularly reminding myself that everyone’s activism is going to be different. There are some aspects, like marches, rallies, and phone banks, that are incredibly important to a movement. But other aspects (and rather introverted ones) of organizing is also really important to movements as well. The entire idea of wanting everyone to participate in the same way seems so unrealistic and often problematic because not everyone has the same abilities and strengths.

Ultimately, I’m trying to unlearn the societal norm and preference of extroversion as the best and the many forms of ableism that perpetuates US culture and society. And while I do think that protests, rallies, marches, etc etc are so incredibly important, I’m also realizing how important other (and usually more introverted) aspects of activism are.