I’m not particularly religious, despite spending most of my life in a religiously affiliated education setting and writing my senior thesis about religious denominational stances on homosexuality. (12 ish years of Catholic school – ugh.) I’ve had a weird personal relationship with both religion and faith, mostly it’s a love/hate relationship and conflicting beliefs. Growing up in a mostly Catholic setting will do wonders for your guilt, let me tell you. And most of my own experiences with religion and faith are heavily based on the fact that I was raised in that mostly Catholic setting during some of my most formative years. 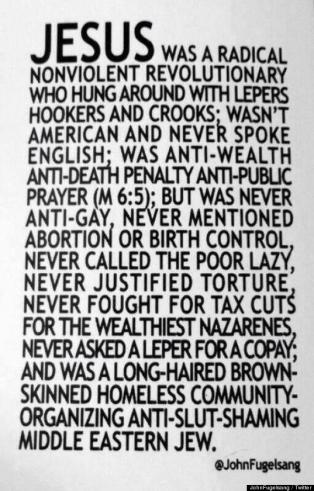 I mean, this guy regularly hung out with known sex workers, advocated for the rich to give more to the poor, and frequently called out people he thought were being hypocritical. The image to the left is from John Jugelsang and reads:

Some articles about Jesus and how he would be signficantly more radical than many conversative Christians would like include: