Jennicet Gutiérrez, the undocumented trans woman who called out Obama, writes about her decision to speak up: http://t.co/iAMGNVatmE 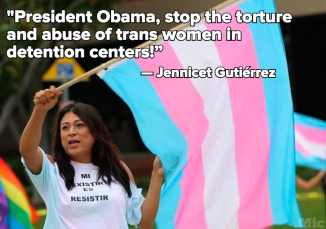 Yesterday, President Obama was interrupted during his speech for a White House event for LGBTQ+ Pride Month by a trans undocumented woman named Jennicet Gutiérrez. Gutiérrez interrupted the president’s speech to challenge the increase in deportations under President’s term and was unfortunately escorted out by Secret Service. She later made a statement saying:

“I am outraged at the lack of leadership that Obama demonstrated… He had no concern for the way that LGBTQ detainees are suffering. As a transwoman, the misgendering and the physical and sexual abuse — these are serious crimes that we face in detention centers. How can that be ignored?”

Gutiérrez later spoke with Democracy Now about the event and why she challenged the president about deportations and the abuse faced by LGBTQ+ detainees in deportation centers. And the crowd at the event was the unfortunate definition of the mainstream gay movement and of Gay, Inc, who responded by booing and jeering Gutiérrez as she was escorted out by Secret Service.

Trans woc: “There’s no pride in detaining queer people.” Gay, Inc.: “Shush! You’re ruining my selfie with the guy putting you there.”

Transgender woman thrown out after showing Obama and most of his guests to be complete hypocrites. https://t.co/181bKjFIau

If there’s one group within LGBTQ circles that needs to be heard it’s trans women of color. — Parker Molloy (@ParkerMolloy) June 24, 2015

I just want to say a big old fuck you to all that booed and jeered Gutiérrez as she left and to the fact that she was escorted out in the first place! Deportations and detention centers SHOULD be a priority within the LGBTQ+ movement – remembering intersectionality and fighting for all our brothers, sisters, and siblings in the struggle is vital. We should be centering the voices of trans women of color and other marginalized voices because the LGBTQ+ community is far from the homogeneous thing currently represented by white cis gay men. Instead of spending a ridiculous amount of money and time on fights like marriage equality (which is usually far from equal), we should be focusing on issues like youth homelessness, deportations and immigration, living wages, proper and accessible health care.

Last night was about life and death and Jennicet Gutiérrez realized that. Much love and respect to her! #IStandWithJennicet

Ultimately, we need to support all trans women of color and not drown them out if they don’t fit into the Gay, Inc agenda of marriage equality and whiteness. All of the love and respect to Gutiérrez for her actions standing up to President Obama yesterday and for all of her hard work and activism surrounding LGBTQ+ and immigrant rights.

One thought on “Jennicet Gutiérrez – the undocumented trans women who challenged the President.”