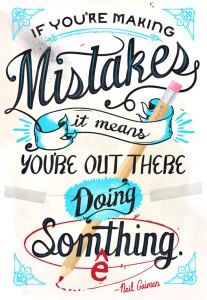 For me, a big part of humanity is that we are flawed and we do make mistakes. But the great thing about mistakes is the ability to learn and grow from them. I do think that if you want to act as an ally and stand in solidarity with different groups, you have to be okay with making mistakes and owning up to them. Ashley Truong wrote about making mistakes as an ally and how if someone does call you out, listening, giving a genuine apology, and learning from your mistake are some of the most important things you can do.

But a big thing is to learn from your mistakes and not repeatedly use “I’m human and make mistakes” as an excuse. Because at least for me, if someone keeps fucking up and uses that excuse on and on again, there’s a very good chance I personally won’t want to be around them for too much longer. Acknowledge mistakes and grow from them.

And I also think it’s important to realize that people change, grow, and learn in the span of days, weeks, months, years. What someone might have believed a few years ago might not be what they believe now and ironclad holding people accountable to problematic stuff they said some time ago can be tricky. I think that if someone is called out and they genuinely apologize and learn from it, it’s important at the very least to acknowledge this.

That doesn’t mean I think marginalized people should coddle the people in power or hold their hands throughout all the discomfort we as people in power are going to face but instead that we can’t expect people to be perfect revolutionaries from the very beginning. Everyone grows in different ways and society is so dead set on keeping up the problematic status quo that what might be apparent to one person might not be so apparent to another.

I hope this adequately describes the points I’m trying to convey about making mistakes. This was actually one of the few times I felt like I didn’t quite have the right words to describe what I’m trying to talk about here but hopefully the message is still understood. And this is as much as a note to self as it is something to consider for everyone else.