Britain invaded like 90 percent of the entire planet, yet #IsBritainRacist is still a question. My gawd.

When I first saw this hashtag on Twitter, I was a bit perplexed and mildly amused because it seems like such an easy question to answer. I mean we’re talking about a place that has literally colonized most of the world, a place where imperialism lead the way for centuries. And the hashtag seems to be filled with people pointing out how Britain is racist or actually proving the fact.

In some areas, you’re 17 times more likely to be stopped and searched if you’re black. #IsBritainRacist pic.twitter.com/gpuZ31TCtx 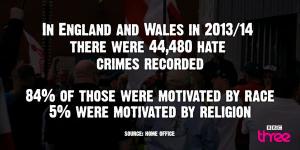 The hashtag came from a BBC production under the same name that explored race relations within the UK.  One survey has found that racial prejudice is actually on the rise in the UK. Also, George Yancy and Paul Gilroy had a discussion around what black lives means in Britain and police brutality is also a problem in Britain. And the group Britain First has a BBC documentary based on their attempt to ‘ban all traces of Islam from the UK’.

There’s so much more out there that I’m not covering but ultimately, I’m not saying that every single British person is racist (and if you think that please reevaluate your life for a moment). But instead, I just wanted to point out that Britain does have a racism problem, even if they don’t want to acknowledge it.