Today, I read and watched Chimamanda Ngozi Adichie’s essay and TEDx Talk We Should All Be Feminists. And honestly, there is so much that I love about this essay – Adichie does a really wonderful job of defending the label of feminist and how gender needs to be considered when thinking about inequality. (Although, there are some flaws.) Her TEDx Talk is below and you can buy the adapted essay here. In this post though, I’ll be focusing on reviewing the adapted essay.

In her short and adapted book based on her 2012 TEDx Talk, Adichie writes about the different ways we treat men and women in different societies (primarily the United States and Nigeria). She describes some of the ways in which women are treated differently than men in Nigeria – like how hotel managers think lone women coming in might be sex workers or that women sometimes can’t get into nightclubs without the escort of a man. She also writes about the second shift work – a sociological phenomena that describes the house work done after work and something that’s typically done more by women than men.

Adichie also writes about how some traits seen in men are often praised in work settings but those same traits are discouraged and seen as a liability to women in the exact same settings. Men can be aggressive and bossy in the workforce and praised for it but the moment a woman is the same, there are complaints. She writes about how we pressure girls to be likable and to worry about how others think of us but we don’t do that for boys.

All of this and much more is done in this short book. Adichie also writes about the fagility of masculinity, the blaming of rape/assault victims, and how gender can often be a difficult conversation. The most important part though, as least for me, is that Adichie defends the usage and labeling of feminist, saying that:

Although, as great as I think this book is as an introduction into feminism, I don’t think it’s perfect. There are many parts in which Adichie is quite heteronomative and cissexist. Throughout the essay, she cites differences between the two binary genders of men/boys and women/girls. A big part of those differences Adichie writes about are the biological differences but that is under the assumption that man = penis, XY chromosomes, and other assumed biological characteristics and that woman = vagina, XX chromosomes, and other assumed characteristics.

Those biological differences that Adichie keeps referring to don’t always determine gender nor are they always consistent. Intersex and trans people do in fact exist, meaning that there are people whose genitalia are ambiguous upon birth or people  who don’t identify with their assigned gender. There are men with vaginas and women with penises and having those characteristics don’t make them any less of their identity.

Another detail is that Adichie writes about virginity – saying exactly that “the loss of virginity is a process that usually involves two people of opposite genders”. Again, there’s that assumption that everyone is heterosexual and that there opposite genders instead of different genders. And while I agree with her sentiment that women are shamed for having sex while men are praised for it, I don’t think that we need to constantly assume that a penis in vagina sexual experience is universal or the only “real” kind of sex.

Ultimately though, I think that both the video and the adapted book/essay are a great introduction to feminism and I love that Sweden gave the book to every 16 year old student recently. I’m really on board with the fact that Adichie does a really great job at acknowledging the gender differences in how we treat people and defending the label of feminist and femininity. I do think that this short book and the TEDx Talk are a great way to explain the different ways men and women experience the world (despite the fact that it does alienate much of the LGBTQ+ global community).

However, I don’t think that feminism work and education should stop at this book and I realize that it’s not a perfect production. Adichie adheres to heteronormativity and cissexism within both the book and video and feminism should be intersectional, inclusive, and cognizant of the different ways in which we all experience gender.

The weight we put on gender is incredible and it’s starts for people often before birth (and definitely when they’re assigned their gender at birth). We assume what babies might turn out to be based on what genitalia may or may not be between their legs. We assume what babies like, don’t like, who they love all before they can talk, walk, hell before they can even lift their own head.

The assumption that we all identify as our assigned gender at birth is not only very limiting but for some who don’t identify as such, very dangerous and/or very terrifying. Coming out as trans in any way is scary because you never know how people might react – there are often many invasive questions about our bodies and our lives, often from strangers who have no business knowing such intimate details. Even scarier, some have actually killed trans people once finding out their trans identity and used the defense of “trans panic”, which blames trans people (usually trans women) for their own murders.

A part of all of this also includes pronouns because using the right pronouns for people (especially trans people) will make you a better ally to the trans community. Ignoring someone’s gender pronouns, especially if that someone is a loved one, says so much about who you are and how you view someone else’s lived reality. Using the wrong pronouns for someone (particularly a trans someone) for whatever the reason is incredibly hurtful because you’re constantly saying that you know that person better than they do, that their identity isn’t real, and much more.

There are easy things to do and other things to avoid when someone in your life asks for different pronouns – the most important is to respect their decision and honor it. And it might take a bit of time to relearn someone’s pronouns but doing so is important. If you do fuck up and make a mistake with a person’s pronouns, correct yourself and move on. Everyone makes mistakes but don’t constantly fall back on that.

One that has been on the rise recently has been the singular “they/them” and while there are some objections to using the singular they, using it for people is important and validating because you are reinforcing that person’s identity. (If you do come across some of these common objections, there are ways to shut them down.) And if you’re cis and uncomfortable with they/them pronouns, that might actually reveal some unchecked privilege about yourself.

I believe that we should move away from assuming people’s genders not only on a day to day basis but also assuming and assigning gender to newborns. The strict gender binary that we live with here in the US is harmful for many reasons, particularly for those who don’t fit neatly into our prescribed notion of assigned gender. We should allow for self expression and self determination with many things, especially gender. And a part of that includes honoring people’s pronouns and genders, whether or not you’ve heard about it before or not.

I am so on board with all people having a living wage, along with other fair and consistent working conditions like regular hours/scheduling, paid sick leave, parental leave, etc. If I’m really wishing for things, it would be the destruction of capitalism but in the mean time, I think that it’s incredibly important for a minimum wage increase to happen and to unlearn some of the myths that work against low wage and entry level workers.

There have been numerous cities all over that have been fighting for (and some have won) $15 an hour minimum wage, although full implementation will take some time. And while there have been some wins and major political support, the Fight for $15 movement has been met with some resistance. A part of that are the myths that still exist around low wage and entry level jobs.

END_OF_DOCUMENT_TOKEN_TO_BE_REPLACED

Shocking right? Tina Fey is quite literally the definition of white feminism – her work and activism fights for equality of (white and middle class/rich) women and lacks any sort of intersectional lens. 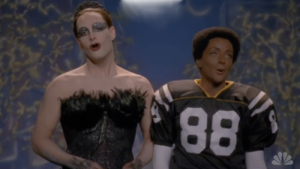 A part of the reason I consider Fey to be problematic is because of 30 Rock – the show in which she was the creator, executive producer, and star. The show was loosely based on Fey’s own experience being head writer at SNL and during its seven season run, there is ableism, blackface, and so much more. There were at least three instances of straight up black face in the show, twice done by Jane Krakowski’s character. And there have been more than one rape joke in many of the show’s episodes.

END_OF_DOCUMENT_TOKEN_TO_BE_REPLACED

The police are structurally placed to protect whiteness against violence, where violence is the imminent action of the black male body. And because within this schema, the police protect whiteness, their own violence cannot be read as violence; because the black male body is the site and source of danger, a threat, the police effort to subdue this body, even if in advance, is justified regardless of the circumstances. Or rather, the conviction of that justification rearranges and orders the circumstances to fit that conclusion… He is hit in exchange for the blows he never delivered, but which he is, by virtue of his blackness, always about to deliver.

Judith Butler, on why video of Rodney King’s beating wasn’t sufficient evidence for a jury to convict the officers responsible, Endangered/Endangering: Schematic Racism and White Paranoia

**I’m specifically talking about the US for this post because things are different in different parts of the world.

END_OF_DOCUMENT_TOKEN_TO_BE_REPLACED

I am a big fan of animals and have been lucky enough to spend most of my life with pets. Going on shelter websites and seeing the dogs and cats they have up for adoption is often the hardest thing because I just want to adopt all of them.

But adopting a dog or cat is a big decision and there are so many things to know before you bring a new animal into your life! It’s important to realistically outline how much time, money, and effort you have. Because animals, especially dogs, take a lot of you and resources. So here are some tips and things to keep in mind: