At this point, there is still just a tiny little part of me that keeps waiting for Donald Trump’s presidential nominee campaign to be a joke or to flitter out. But he keeps gathering support (winning two of three Republican caucuses so far) and garnering audiences state by state. I’m getting more and more worried because in part because he seems really serious about this and there are people who are taking him seriously. 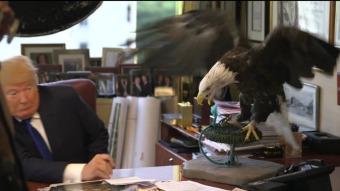 But one thing about Trump is that he is entertaining, which is why I think he keeps getting media attention. This is a guy who is fit for reality tv and it seems like everything he does writes clickbait worthy headlines. Even his photo shoot with an eagle made news. (I do think that the symbolic bird of the US attacking him really says something…)

His supporters seems to be another interesting aspect to this campaign year and Trump seems 100% supportive of a lot of the violent things people have done in his name or at his rallies. There was the time his supporters beat up a Black Lives Matter activist at one of Trump’s rallies; another time in which Trump was cited as inspiration for the beating of a homeless Latino man. There was one Trump rally that turned violent with supporters pushing and spitting on immigration activists AND that happened again at a completely different Trump rally.

Over and over again, when asked to explain what they like about him, Trump supporters exclaim, “He knows what I’m thinking!” And what these people are thinking is that he’s making it safe for them to be “politically incorrect” again, giving sanction to publicly express their resentment toward people who don’t look and act like them.

Honestly though, there’s a lot about Donald Trump and his supporters that really terrifies me. He promotes xenophobia and racism to the max with his rhetoric on banning Muslims and building a wall along the US/Mexico border. His thinking and zero filter in sharing it has literally led to violence from his supporters. He is also doesn’t believe in climate change – saying that the changes are just weather and created by and for the Chinese.

The idea of him being president has me packing for the hills. Maybe I will just take Cape Breton’s offer up.