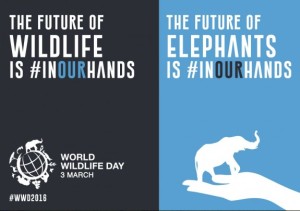 Today is Wildlife Day – the anniversary of the signing of Convention on International Trade in Endangered Species of Wild Fauna and Flora (CITES) and a day to raise awareness for wildlife. This year, the focus is on the world’s elephants – animals that face various issues like poaching and abuse.

There are other animals that are in danger for various reasons and some of these animals include: red pandas, sea otters, and gray wolves. In the US, it’s under the Endangered Species Act that the federal government has responsibility for endangered and threatened animals, along with critical habitats. In addition that and other legislation, there are humans that are working towards slowing the impact of humans (like in the Galapagos) but it would take a lot of time and resources to save every endangered species.

Support for endangered animals can come in various ways, like supporting different organizations that work on conservation, environmental justice, and anti-poaching. Plus, talking about these issues online is important to increasing understanding about what endangered wildlife face. Another way (and there are many more) is to not put animals in danger for things like selfies, (and yes, there have been several cases of people putting sick or endangered animals at risk for a selfie).