I know I’m a few years late to the game but I just recently finished all seven seasons of NBC’s Parks and Recreation. And oh man – this show is equal parts hilarious, emotional, and honest. I love that the show was filmed in a similar style to The Office – it allowed for the show to feel real in the midst of all the wacky moments. 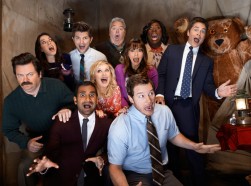 We see Ron grow from this closed off civil servant to having this vulnerable moments asking for help from Leslie. April and Andy grow up to become these weird but totally wonderful adults and both Donna and Tom become successful (for the most part) in their own right. Leslie remains this ambitious civil servant and goes from the Pawnee parks department to the city council to the National Parks Service to the governor of Indiana (and maybe president??). But during that entire time, the core of her character remains fiercely loyal and passionate about the people in her life (and waffles).

The show was mostly white people but comparatively had more diversity than many other mainstream shows. Plus, I loved that many of the jokes involving the relations between white people and the Native American population were ones aimed at white people and our own ignorance.

One of my favorite things about the show though? The final season and the series finale because the show didn’t seem afraid to end. It allowed for closure for both the characters and the fans (at least for me) and didn’t feel like it had been rushed through like other shows. The series finale was set up by the entire last season and felt more like an epilogue than anything – it provided the stories of life still to come for the main characters we’ve grown to love.

Parks and Recreation isn’t a perfection production and I’m sure there are problematic things about it that I missed. But this show has officially become one of my favorites for so many different reasons – the characters and their relationships with each other, the honesty of the show and the people in it, the jokes of white people and our ignorance. Now if you’ll excuse me, I’m going to blast Mouse Rat and try to get my life together after the emotional mess I was watching the last season.