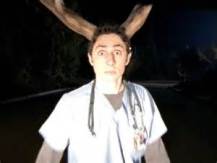 I’m awful at having these important and very necessary conversations. Honestly, if I were an animal, I’d probably be some weird and very creepy combination of a deer and a possum because I frequently freeze like a deer in headlights and then promptly pretend I’m dead to avoid any further social interaction. It’s not a particularly great response and in the event of any sort of real life purge, I’ll probably be the first one dead. But until that day, this response also means that I am awful at having tough conversations.

But having conversations about race as white people with other white people is incredibly necessary, especially now that we’re living in Trump’s America. Racism, xenophobia, misogyny, and every aspect of hate and ignorance that Trump built his empire and his campaign on was already a part of these United States and has been since the founding but now his supporters feel validated and are acting on that. Not only will we now be facing about the uncertainty of how Trump will act in office but he has the support of a Republican congress and some of his supporters seem more vindictive than usual.

As many holidays are fast approaching here in the US (with Thanksgiving this week), I’ve collected tips and ways to engage with other white people about race. There are a few obvious things about this that I’ll state nonetheless: this is specifically for myself and other white people as a way to learn and better engage and this list is in no way an exact or perfect guide to conversations.

This was specific to race and related issues but it’s also important to have conversations about other -isms that exist here. People with various disabilities and/or medical issues will be impacted by the next administration and face acts of ableism on a near constant basis. LGBTQ folks will see legal and social setbacks, especially with a vice president elect who supports conversion therapy and the party in power who are actively against LGBT folks of all kinds surviving and thriving. Millions of people will be separated from their families because of conservative immigration policies and building a wall between the US and Mexico will endanger the lives of many. Reproductive justice will probably be set back decades with Planned Parenthood’s funding on the line among other things.

Having these conversations are going to be hard and uncomfortable and there’ll probably be times in which nothing comes it. But as white people, we should still be working towards challenging ourselves and the white people around us about race.